The MFC Deck Grid Creator shortcut works with NFC tags to create a control deck that runs shortcuts and other actions with just a tap. By creating multiple decks, you can have a single NFC tag perform multiple actions. 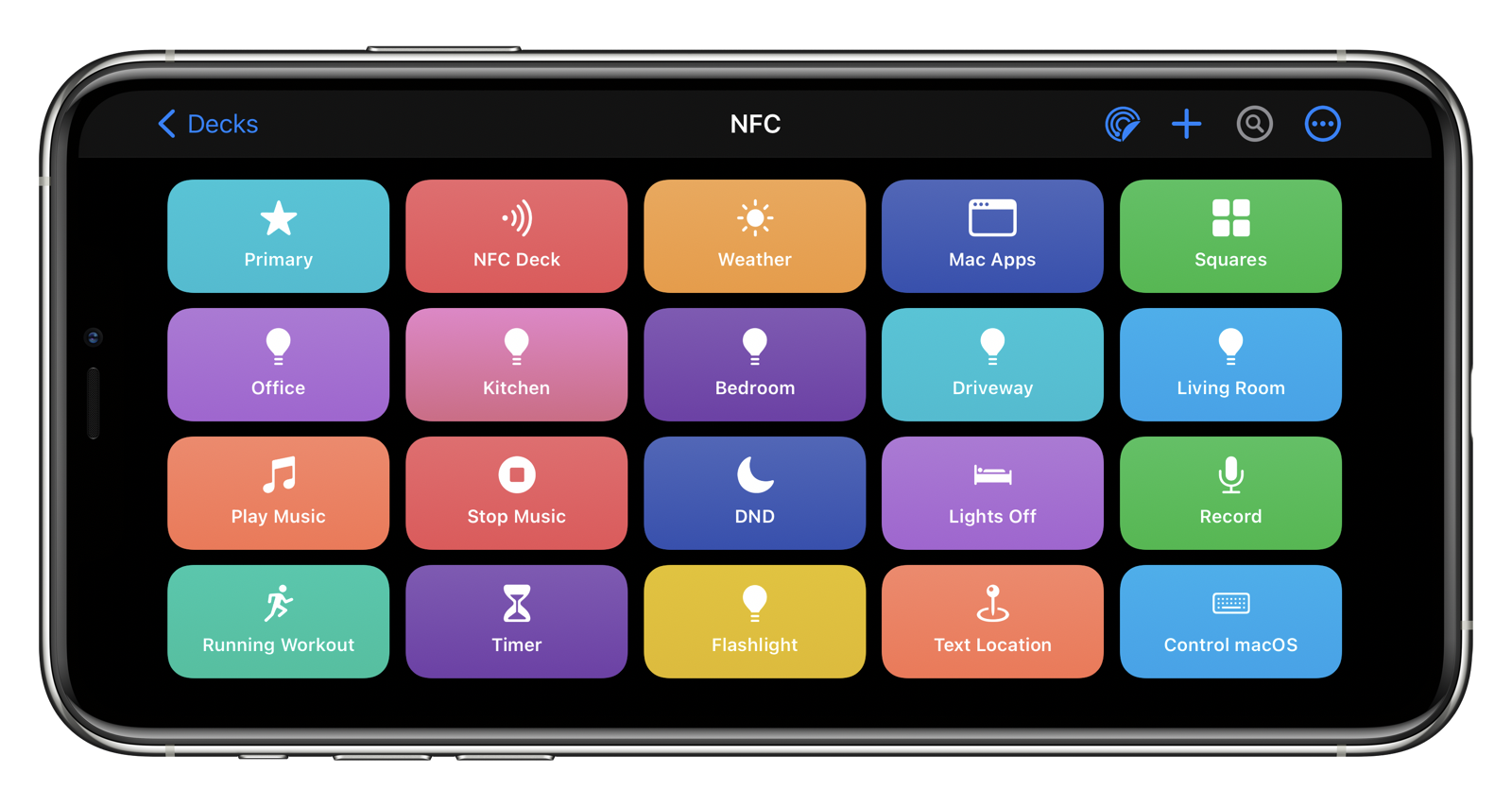 The screenshots below show a deck with a 5x4 grid of cards. 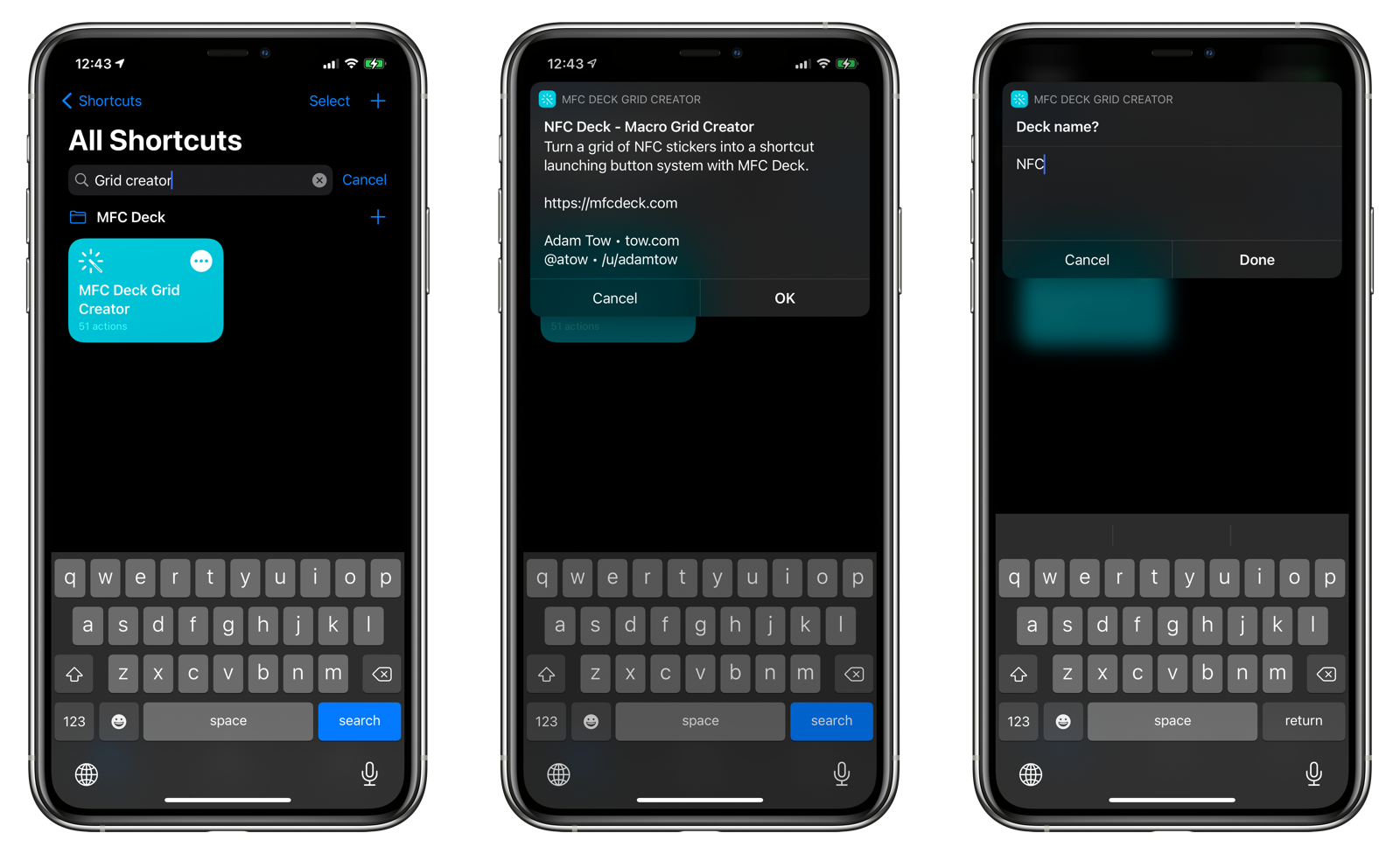 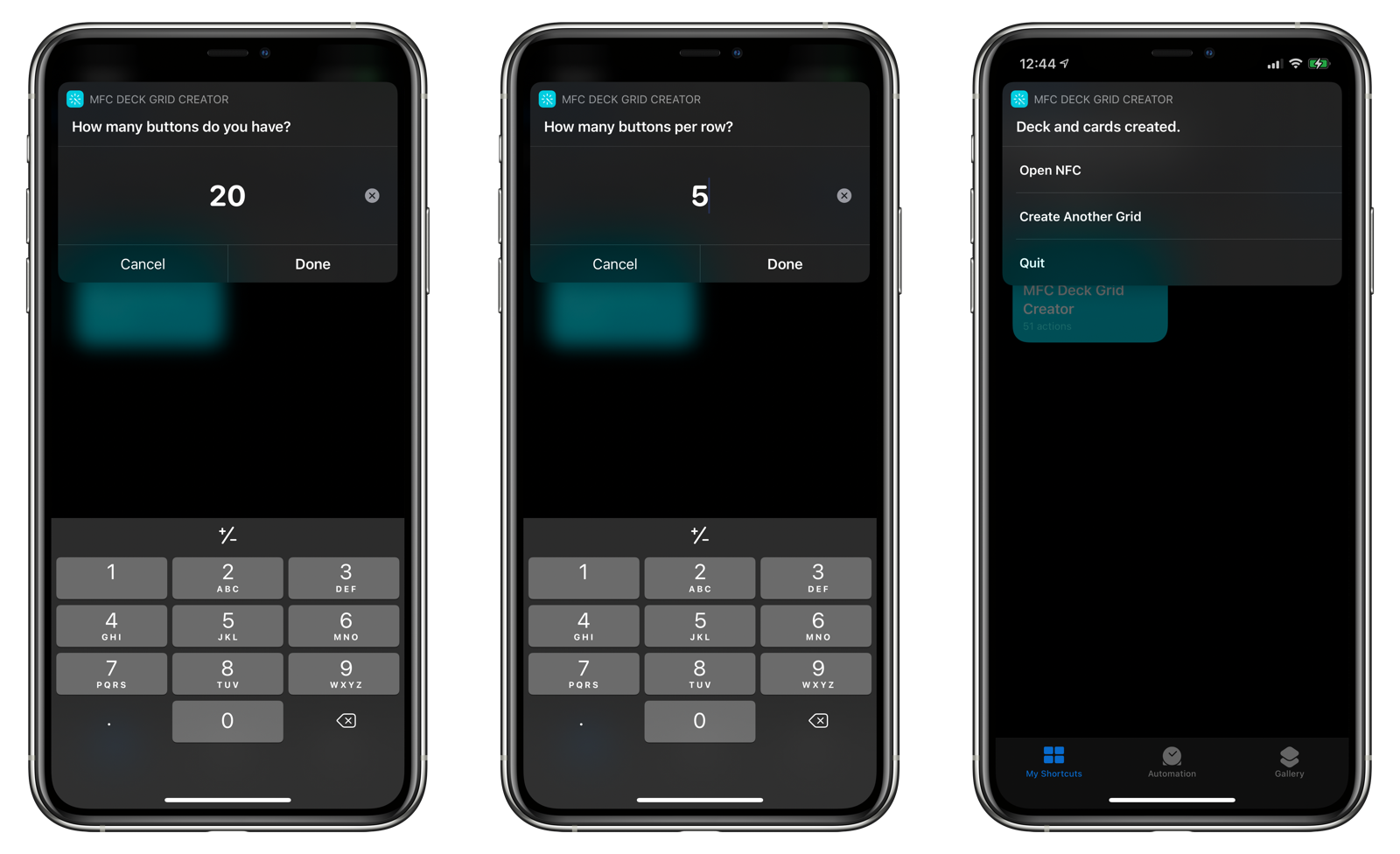 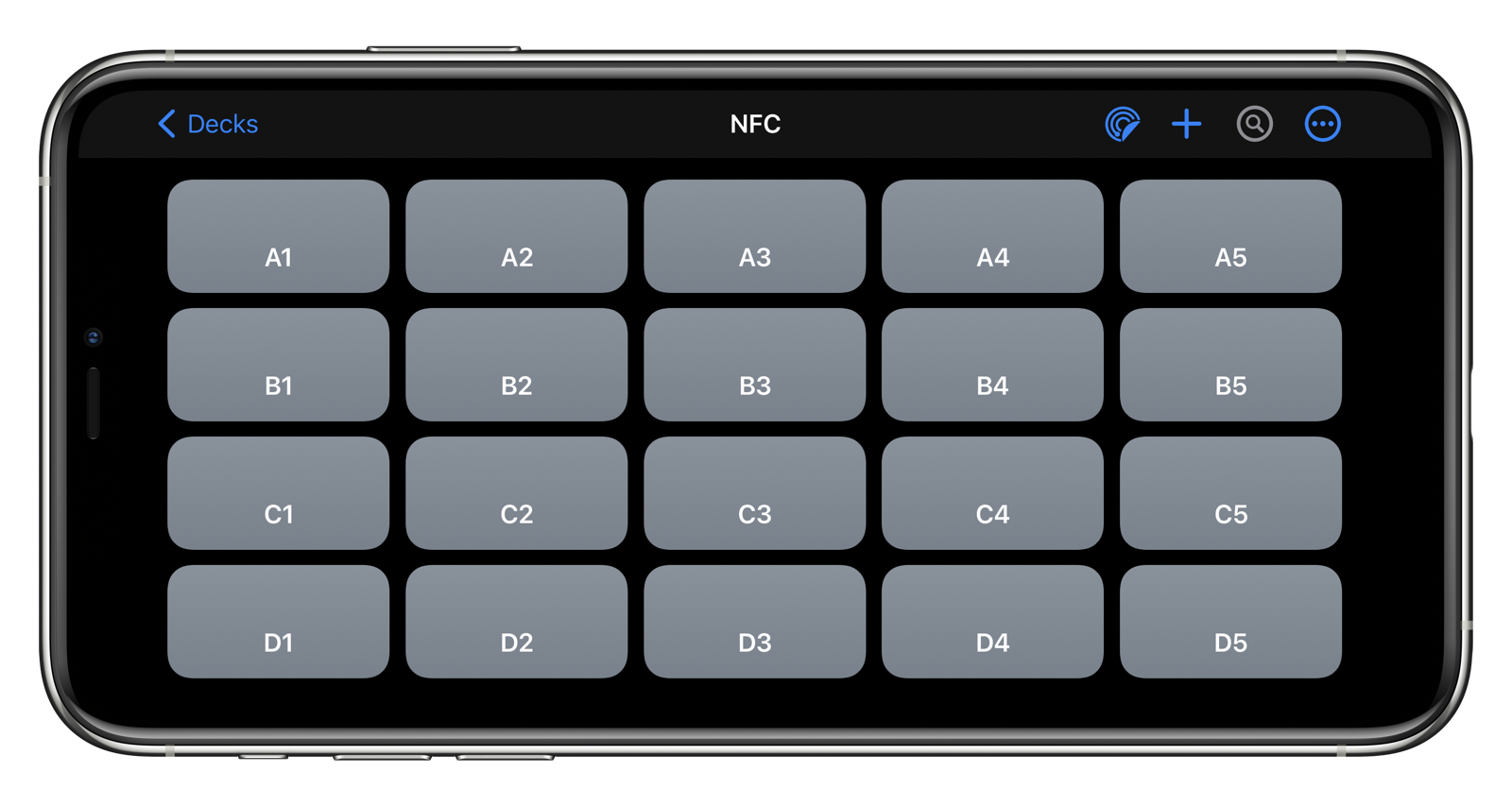 The cards have been assigned a tag that follows the following format:

We will use these tags in the section when defining our automation in the Shortcuts app.

The cards created in the new deck will be blank cards, so now you can define what will happen when you tap on them.

When you have assigned all actions to the cards, your deck should look like this:

Once you have configured all of the card actions in the deck, it’s time to test. With the deck set as the current deck in MFC Deck, hold your iOS device on top of one of the NFC tags. A system notification should appear. 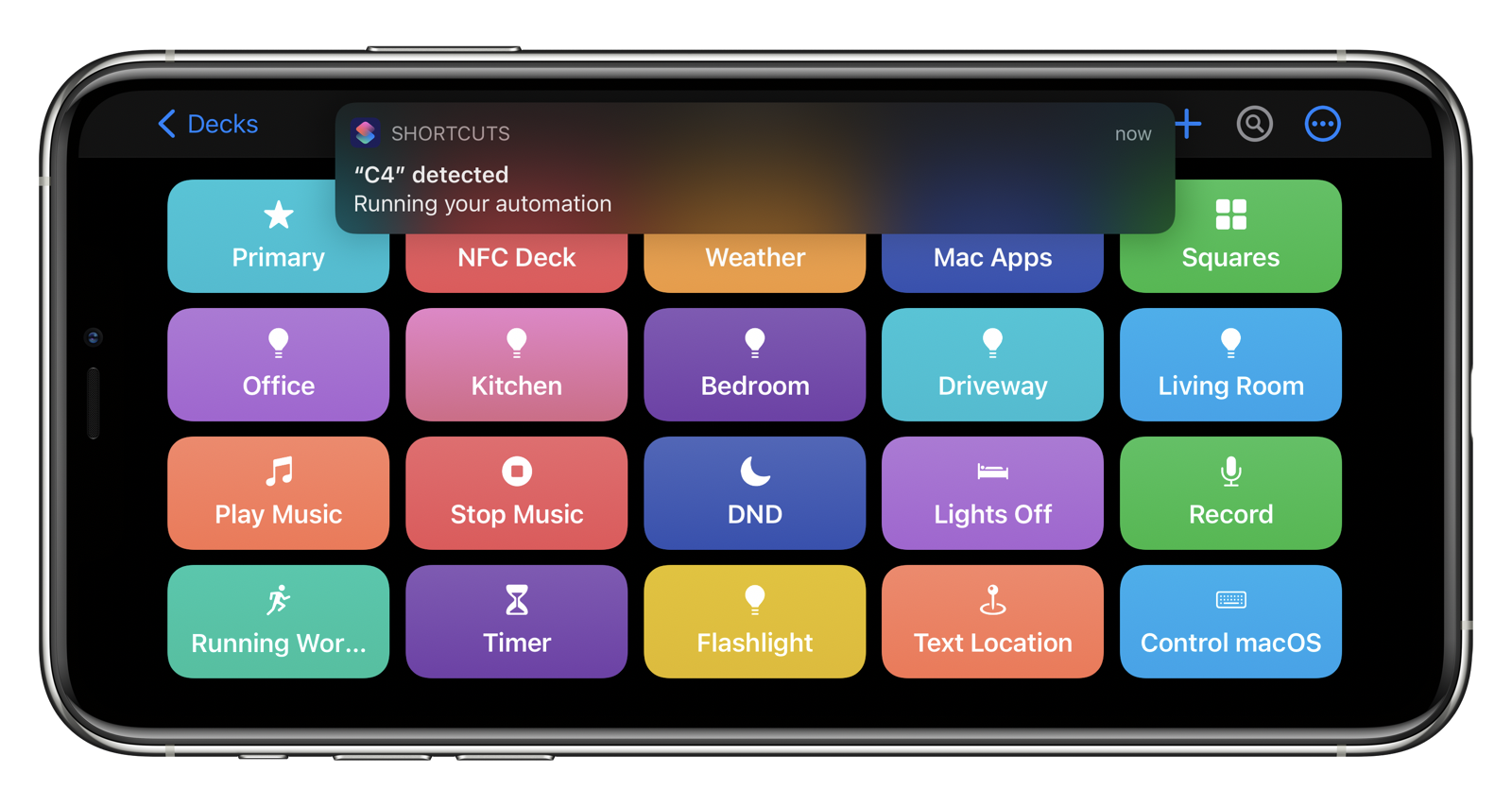 The Lights Off card is the one associated with the C4 tag. It runs a shortcut that turns off all the lights in the house.

To quickly create another deck, you can use the MFC Deck Grid Creator shortcut or you can follow these instructions within MFC Deck. You must have Show Extra Card Actions enabled in MFC Deck > Settings > Advanced.

Once you have created another deck using the same tags but with different actions, running the D5 tag will run a completely different card action. All you have to do is switch to the right deck, and your NFC tag will something different. You don’t have to go into the Personal Automations tab of the Shortcuts app to tweak things.

Within each deck’s setting is an option labeled Passthrough. Enabling this setting allows calls to cards that do not exist in the deck to pass through to either the current deck or a default deck (specified by you in the MFC Deck > Settings screen).

Similar to changing the Watch Face on your Apple Watch, you can programmatically change the default deck periodically throughout the day using the Personal Automation feature of Shortcuts. For instance, suppose your want your NFC tags to perform different tasks depending on the time of day. You can create three decks:

You can then create personal automations that sets the default deck in MFC Deck to these three decks at dawn, in the afternoon, and at sunset. 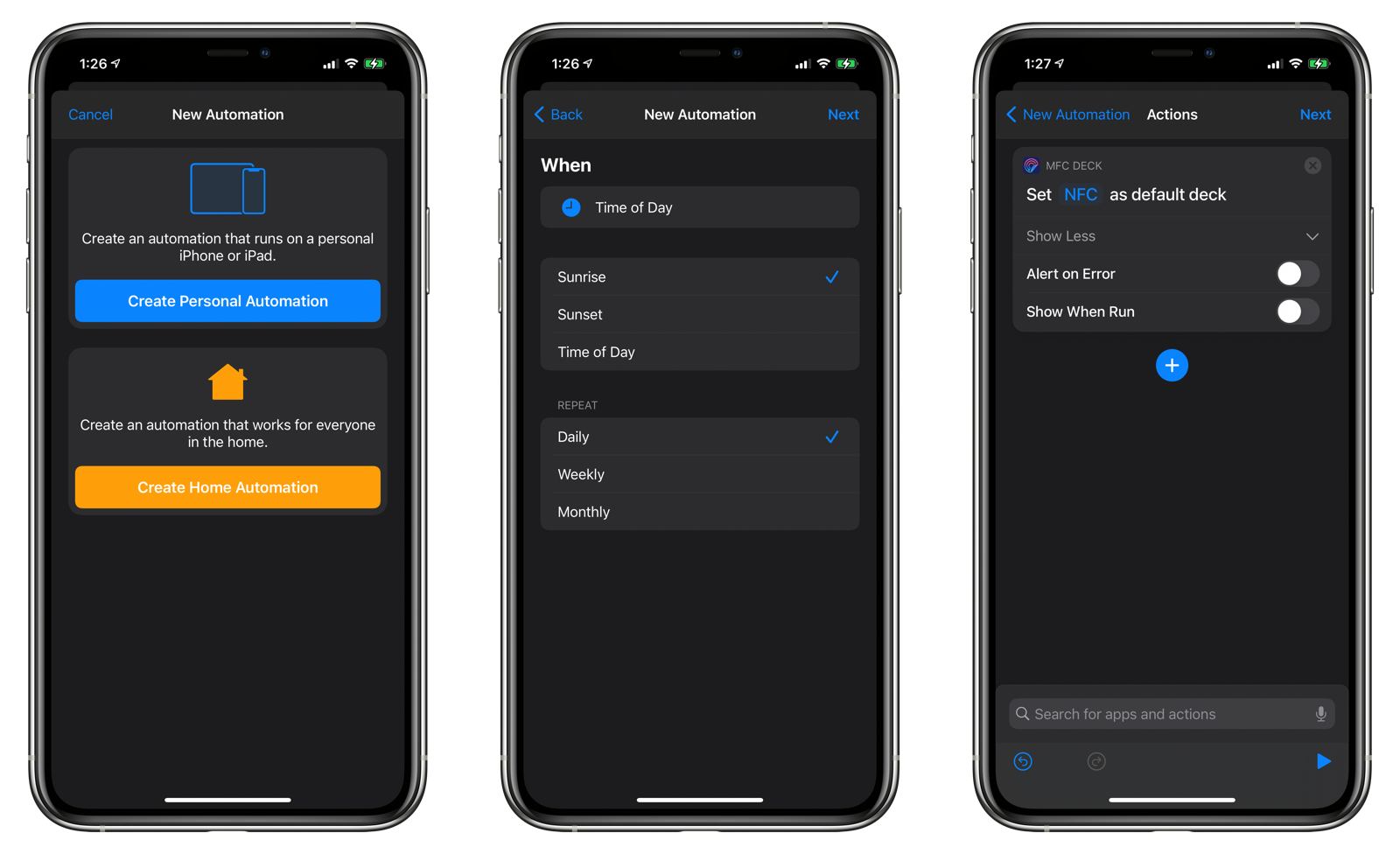 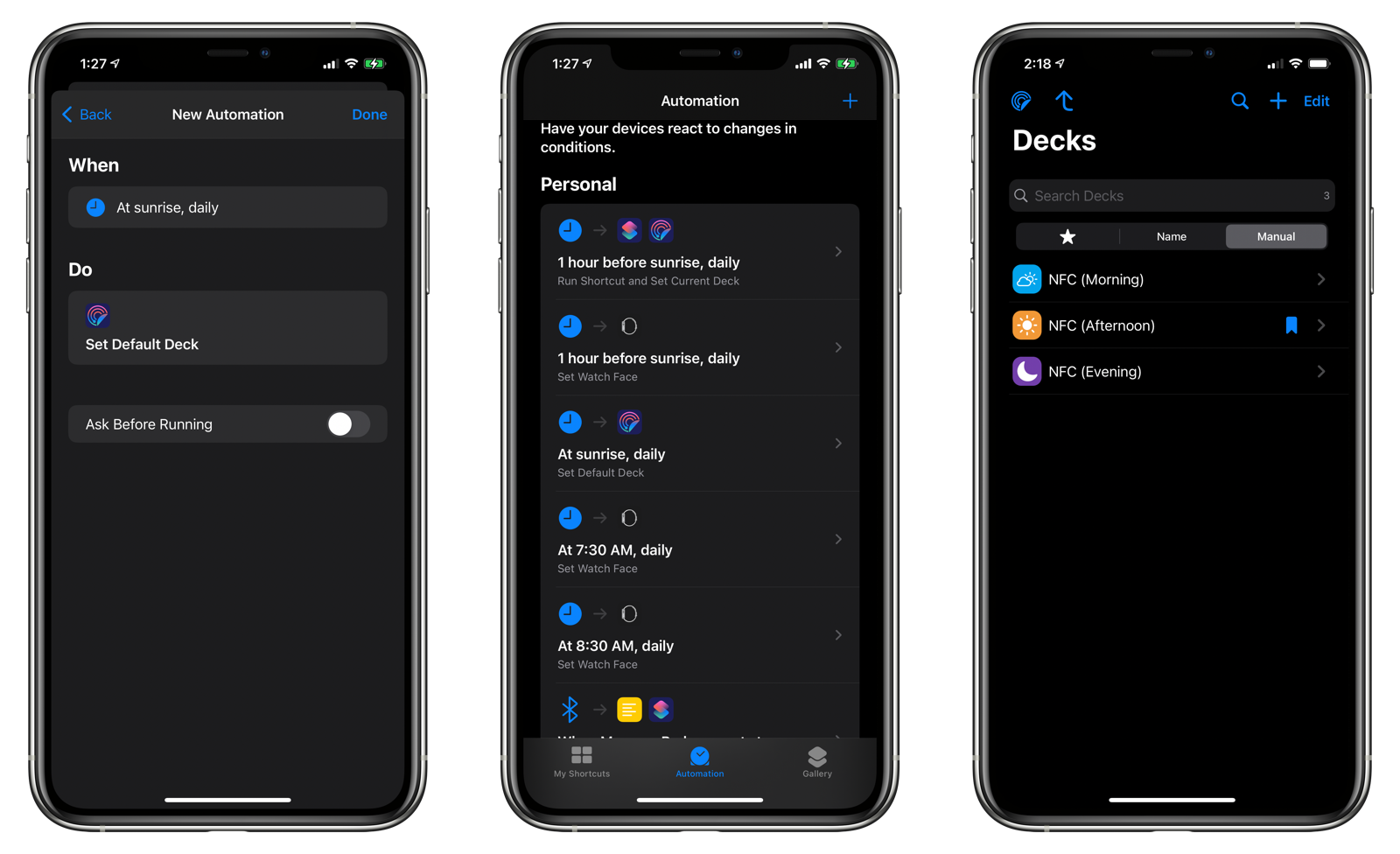 When you tap on your NFC tags, the action assigned to the default deck will run. This allows you to easily assign multiple actions to run from the same NFC tag.