When you install MFC Deck on a new iOS device, you will be presented with the MFC Deck Setup assistant. Follow the steps below to configure MFC Deck.

If you are installing MFC Deck for the first time, tap Begin Setup and go to the next section.

If you have previously installed MFC Deck on a device connected to the same iCloud account, you can skip setup by tapping Start Using MFC Deck. Your decks, cards, tags, and triggers will sync shortly from iCloud.

In order for MFC Deck to work properly, it must first know what shortcuts you have installed. The MFC Deck Helper shortcut syncs the following information about your shortcut collection to MFC Deck:

Proceed to the section on running the update.

NOTE: Do not change the name of the MFC Deck Helper shortcut, or MFC Deck will not work properly.

If you have only used shortcuts downloaded from the Gallery tab in the Shortcuts app, you may see an alert that says Shortcuts could not install MFC Deck Helper because you do not have untrusted shortcuts support enabled. To fix this, follow these steps:

This will allow you to run shortcuts that you download from a location other than Apple’s approved shortcuts gallery.

NOTE: Always be careful when downloading and using shortcuts you download from the web.

If the toggle to allow untrusted shortcuts is disabled, you must first run a shortcut. Do the following:

When you first install MFC Deck Helper, an import question will ask you choose a language. The default is en-US or English. MFC Deck Helper has been natively translated into English.

If you are a native speaker of one of the languages that iOS supports, help improve MFC Deck Helper by providing a localization.

After downloading and installing MFC Deck Helper, return to the MFC Deck application.

Whenever you add, delete, reorder, or change the icon/color of your shortcuts, you will need to tap the Update button, located in the MFC Deck Action Sheet or in the Shortcuts Tab Navigation bar in MFC Deck. 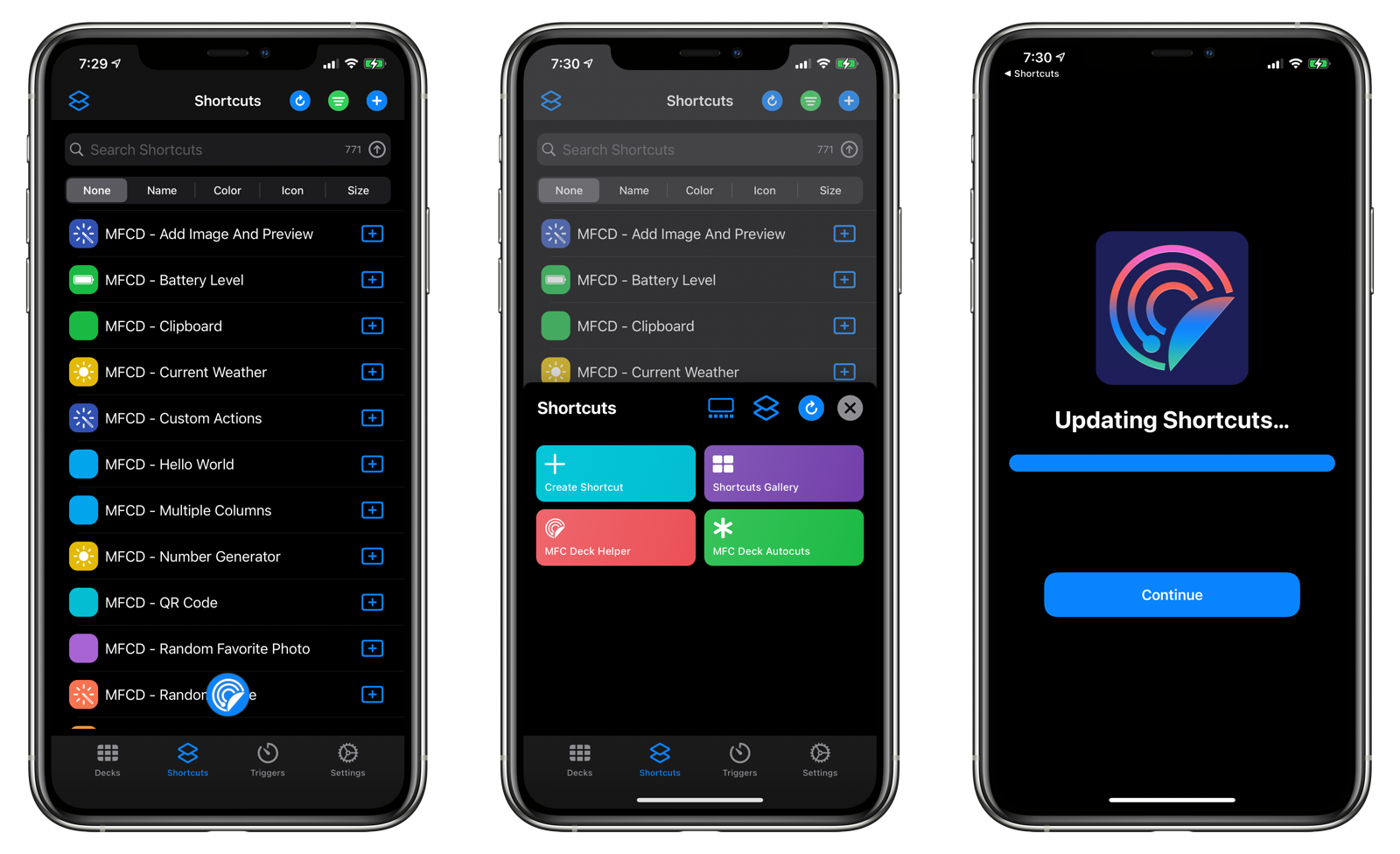 MFC Deck Helper will open in the Shortcuts app, retrieve your shortcuts, and reopen MFC Deck. A progress bar will then appear, showing you each shortcut that has been updated. When complete, you will be returned to the previous screen in MFC Deck.

The next set of screens goes through some of the features of MFC Deck. You’ll be asked to allow MFC Deck to send you notifications.

Custom Actions are a very powerful way to get deep access into MFC Deck. Additional shortcuts are available that extend the power and functionality of MFC Deck into automation. Finally, you’ll get a chance to create some sample decks and cards.

You are now ready to get started using MFC Deck. The final screen will allow you to view the MFC Deck documentation or go straight to the MFC Deck Home screen.