What is a Card?

Cards are the fundamental building block of MFC Deck. Cards are essentially buttons in a deck that can perform a number of actions and display information. A card can be presented in MFC Deck, in Siri voice response, on your Apple Watch, and in a Home Screen widget.

Each card has a single action that runs when you tap on a card in MFC Deck: 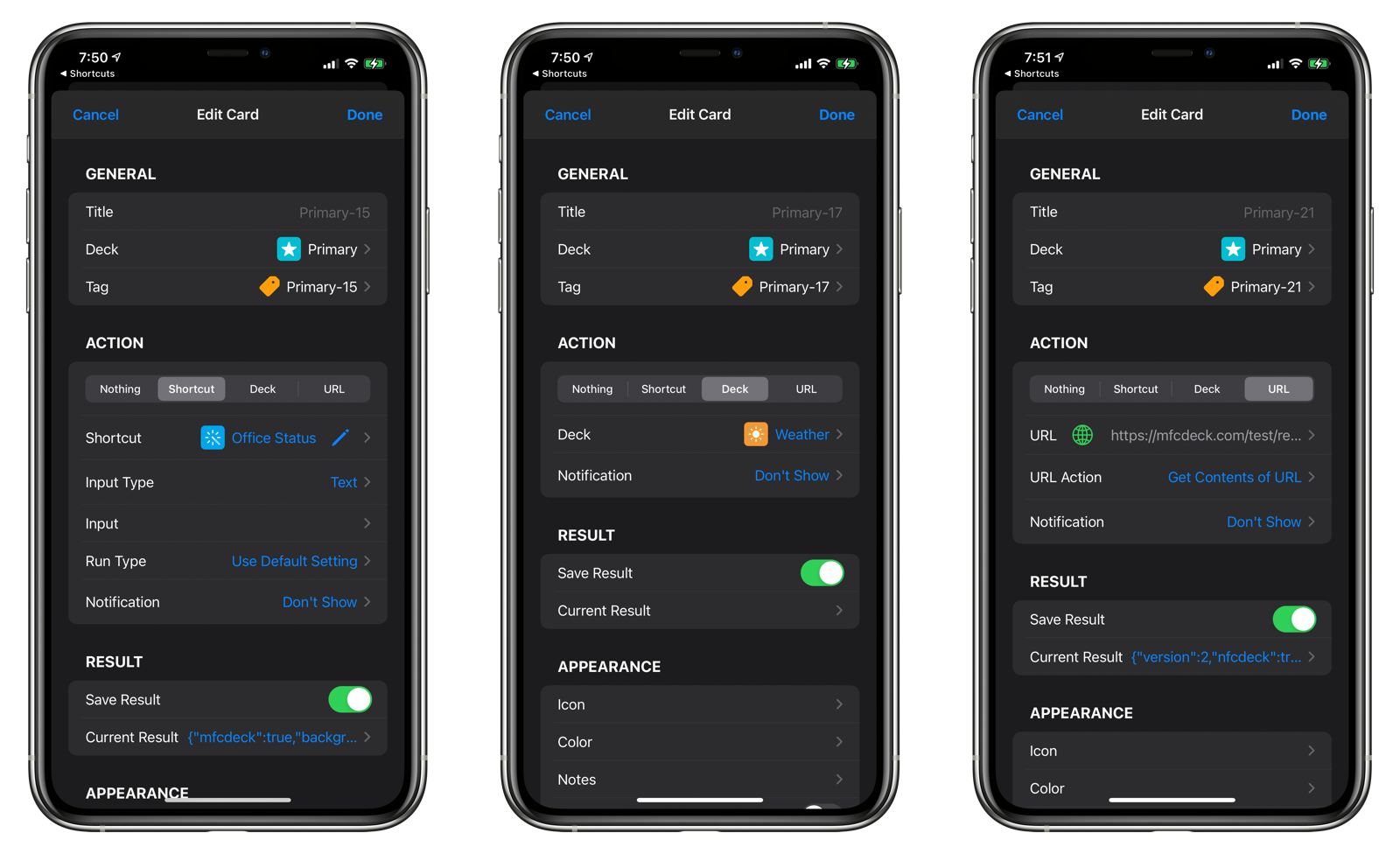 The card result determines how a card is displayed in MFC Deck, Siri voice responses, Apple Watch, and iOS 14 Home screen widgets. The Card Result format is comprised of a JSON dictionary object that specifies how the card looks and what content it contains. For more information, please refer to the API section in this documentation. 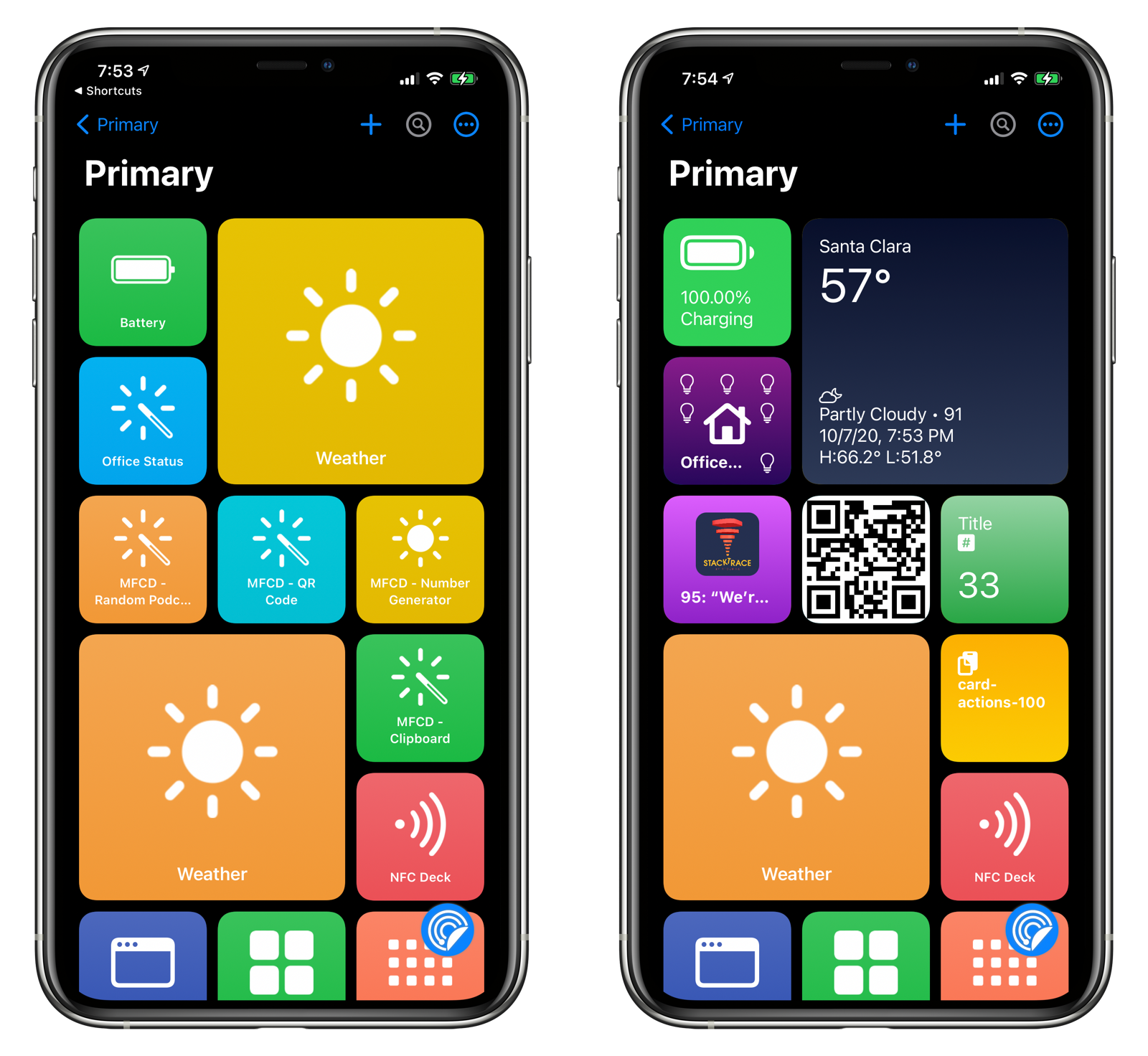 If no card result exists, a default look will be applied to a card consisting of an icon and the name of the card or shortcut.

Adding Cards to a Deck

There are several ways to add cards to a deck:

A quick card creates a blank card but stays in the Deck view. If Tap + to Create Quick Card is enabled in Settings, tapping the + button in the top navigation bar will create a new quick card.

To edit the card, double-tap on it, right-click, or long-press on the card and choose Edit Card to bring up the Edit Card sheet. 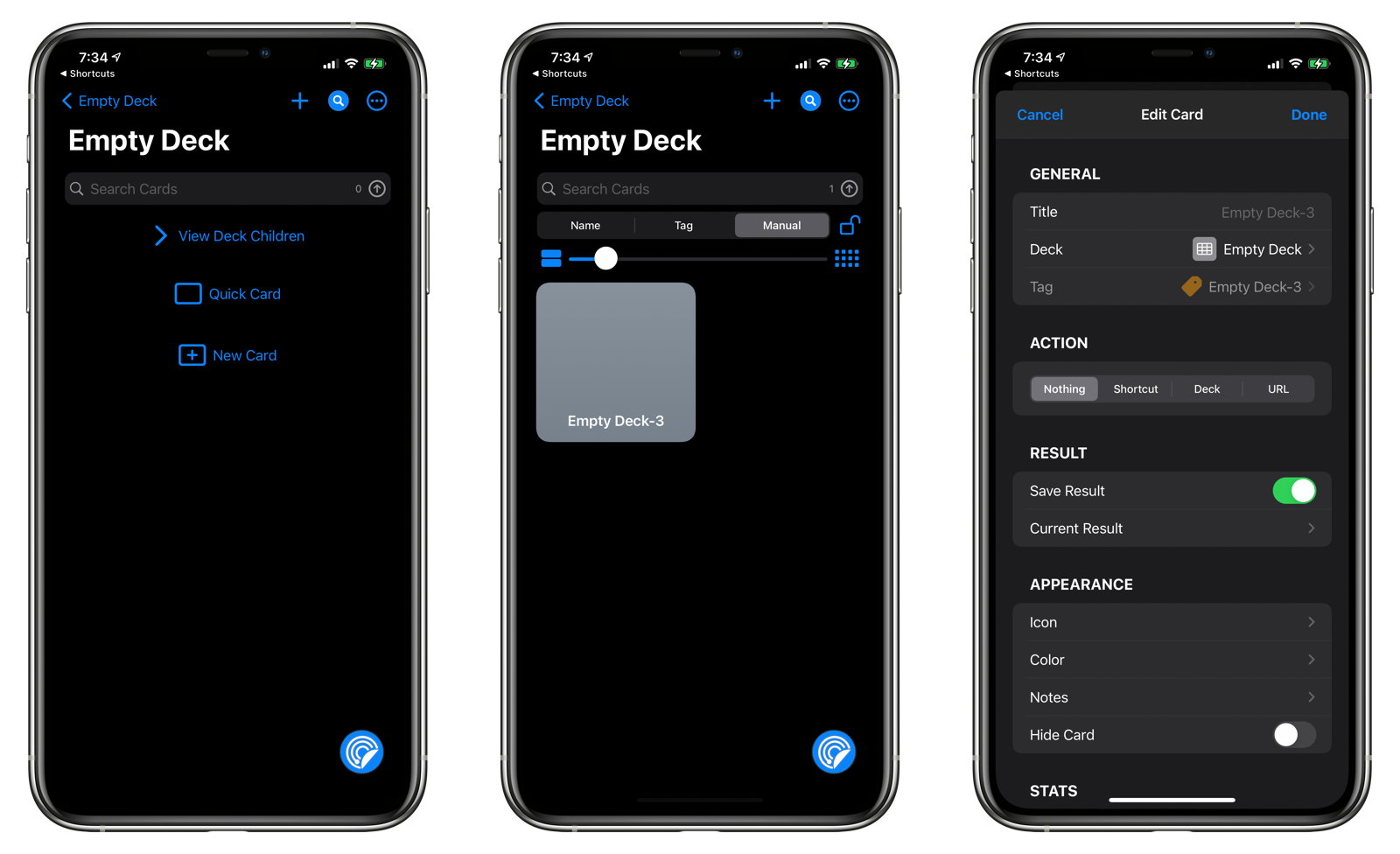 If tags are enabled in MFC Deck, and you try to assign a tag to a card that already exists in the deck, you will be asked to confirm the creation. If you choose to continue, the existing card will be deleted in favor of the new one.

If you want to create a new card in your deck with a specific tag, choose Create Multiple Cards from the Action Sheet or the + button context menu.

A single card can be configured as follows: 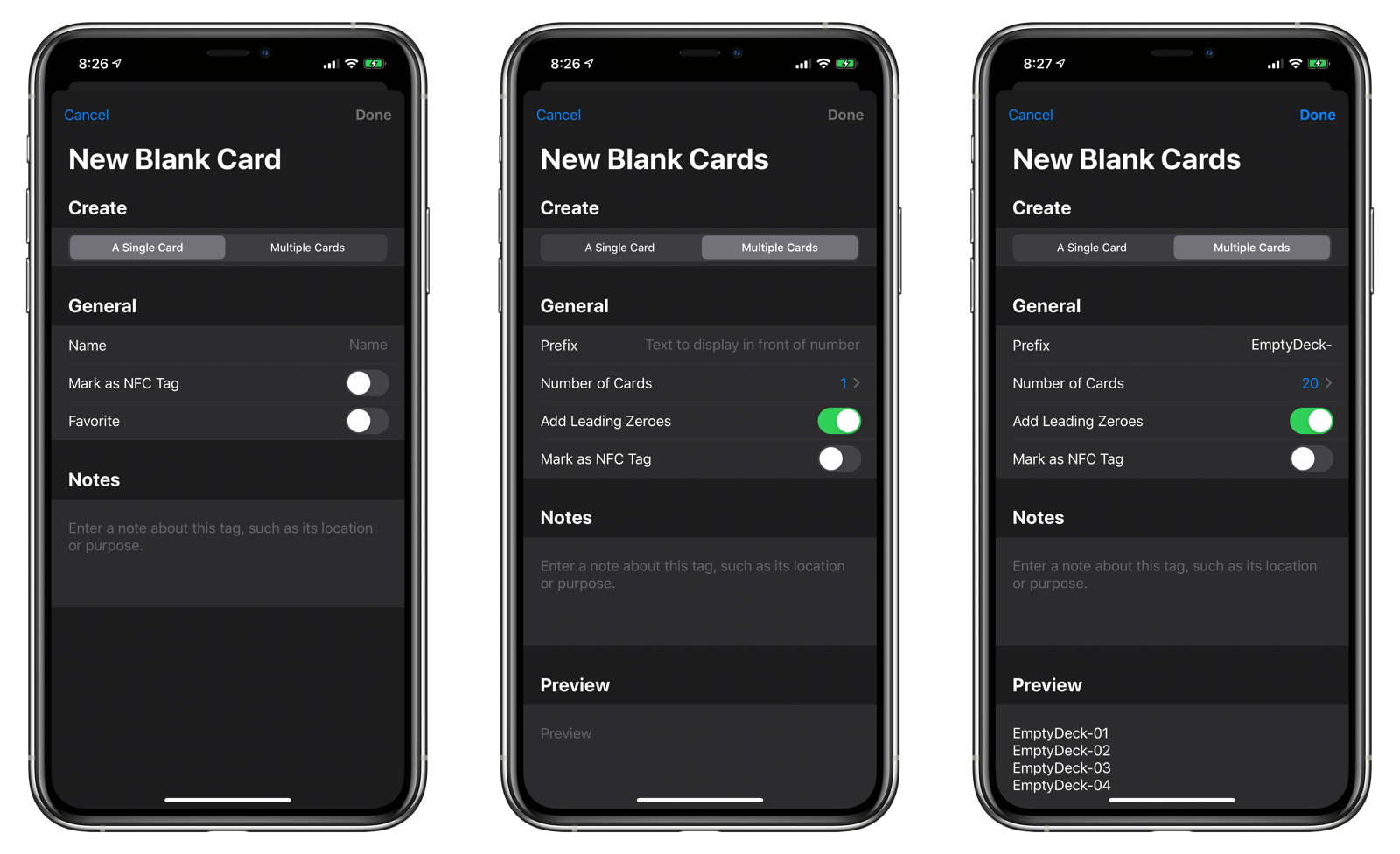 You can choose to create multiple cards in the deck by tapping on the Multiple Cards option. Here you can adjust the following options:

A preview of the cards’ tags is displayed at the bottom of the screen so you can quickly review before adding them.

Tap Done to create the new card or cards and add them to the deck.

If you have existing tags that you want to assign to cards in your deck, choose the Add Existing Tags option. 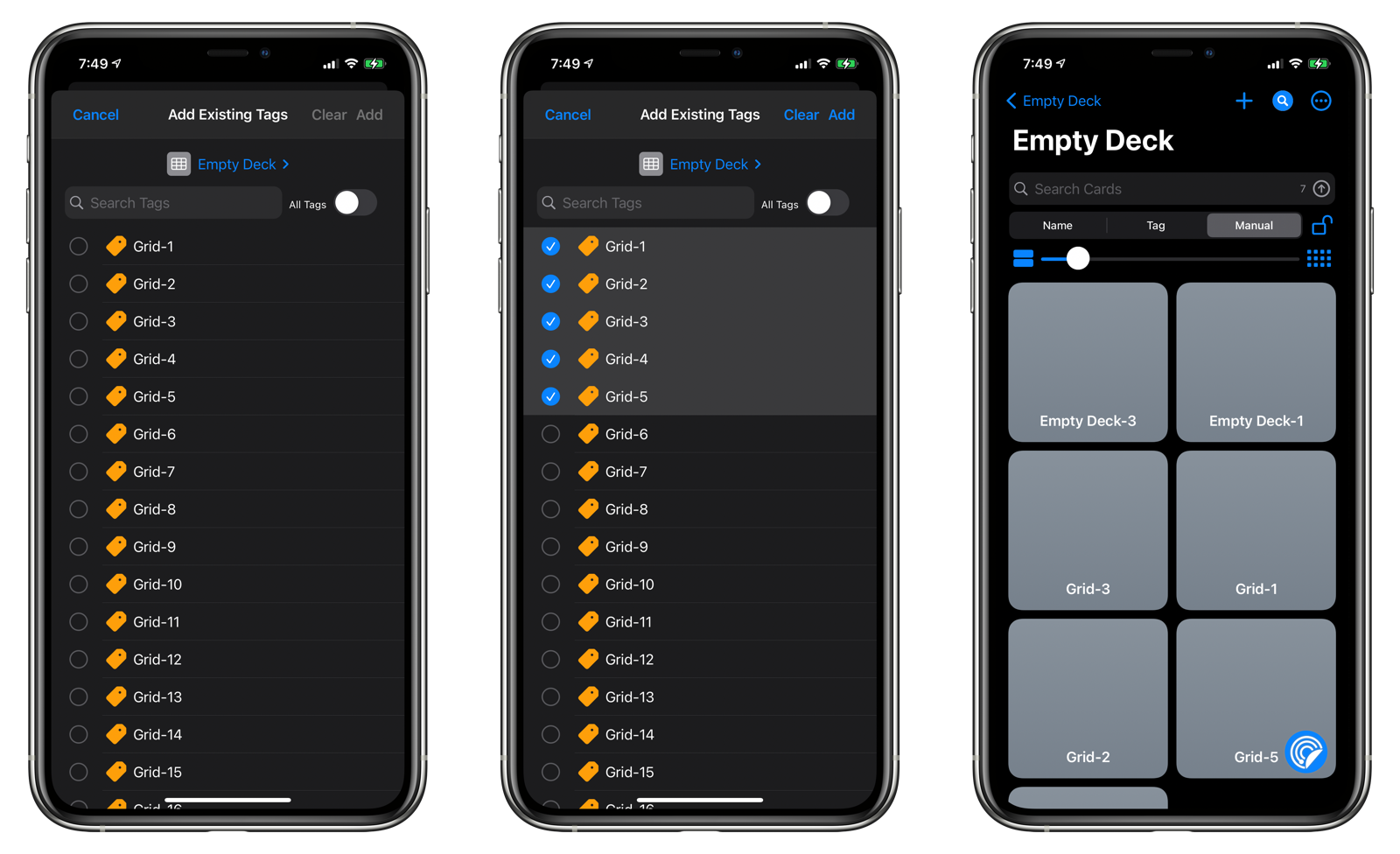 You’ll be presented with a list of all tags in MFC Deck except those present in the deck. Tap Show All to include tags in the deck.

Select the tags you want to assign to new cards and tap Add.

NOTE: Any existing tags selected in this sheet will be ignored when you tap Add. This function does not replace existing cards. Contrast this with New Action Card which will ask you if you want to replace the existing card. 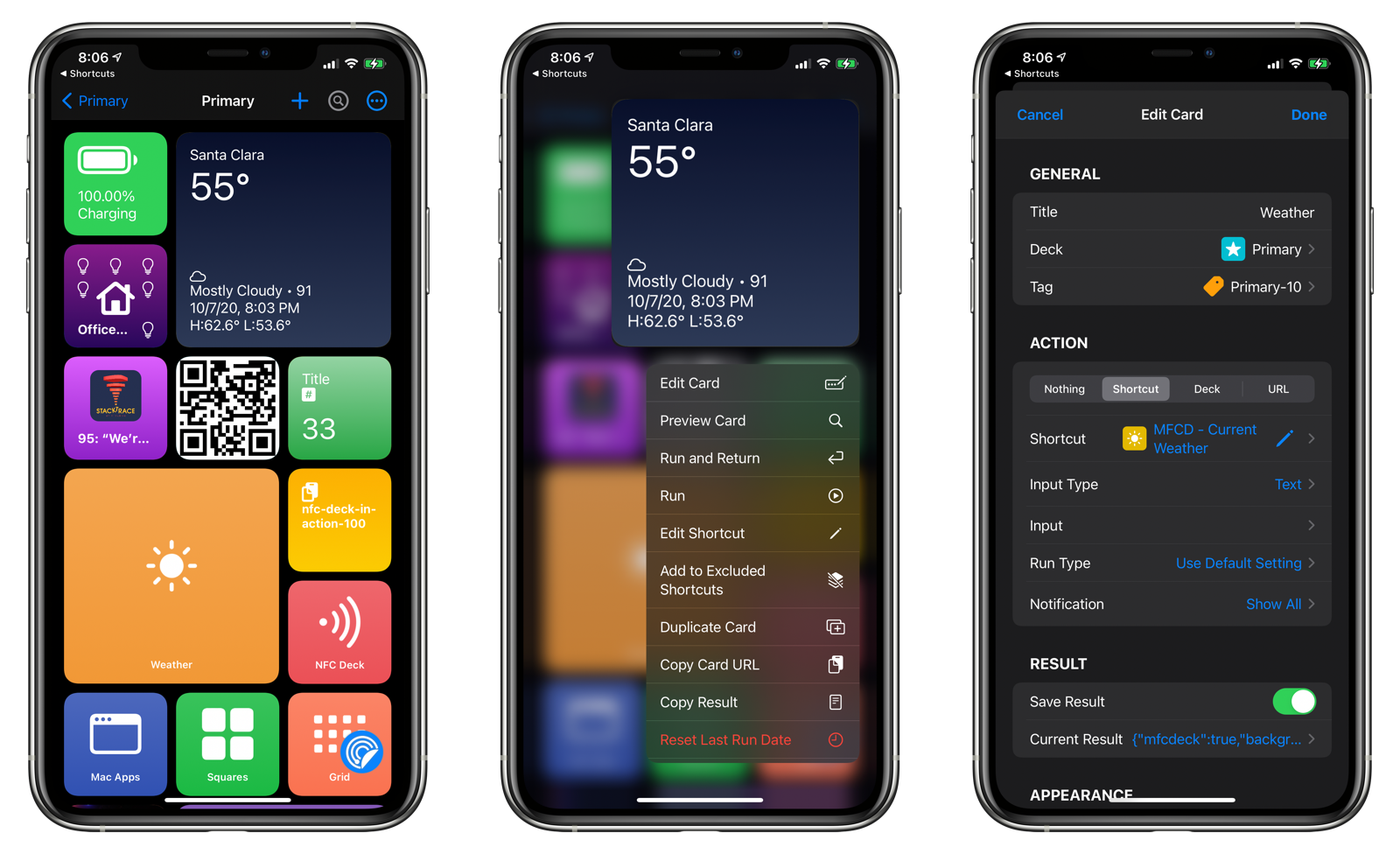 The profile to run this command on.

The tag used to identify the card.

The action of a card is what happens when you tap on it.

The action does nothing, but the card can be assigned an MFC Deck Card Result and will display it to the user in the front-end.

A shortcut to run when the card is tapped. You can configure whether the shortcut should be supplied input. If you don’t see your shortcut in the list, make sure you have run the Update Shortcuts command.

Choosing this option will cause the action of the card be to switch to the selected deck.

Choosing this option will cause the card’s action to process the provided URL in one of four different ways:

With the Shortcut, Deck, and URL actions, you can be notified when the card is run in one of four ways:

You can change the default notification setting for new cards in Settings. 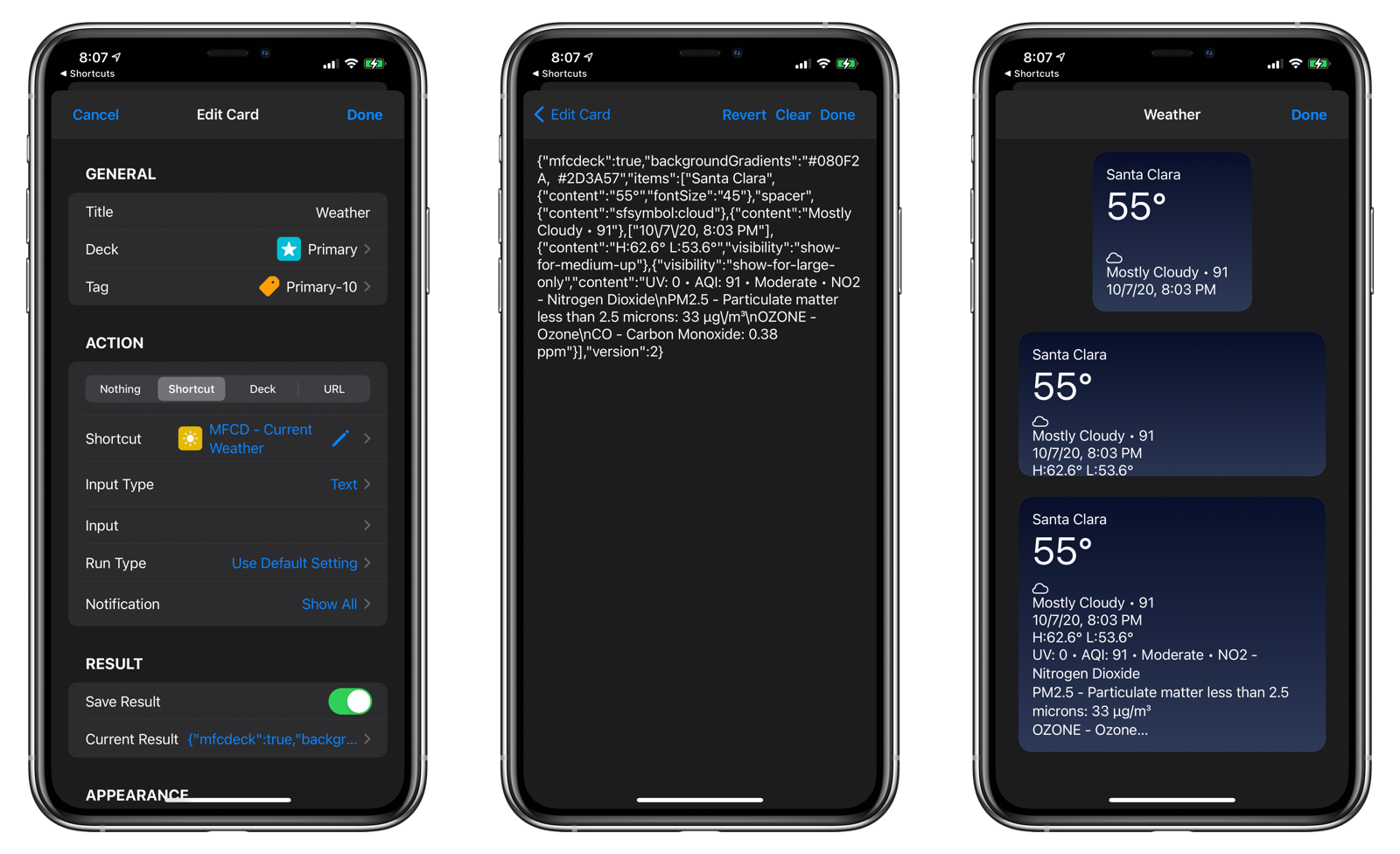 Set how often a card can run. Learn more about this feature here.

This is a premium feature.

Availability and rate limiting are powerful features to control when and how often a card or trigger’s action can be run. Cards can be configured to run according to the following criteria:

Furthermore, you can specify how often a card can run in seconds, minutes, hours, or even days.

In the screenshot below, the card has been configured to run only on weekdays with a five minute delay between runs

The screenshot below changes the card to run from Monday to Thursday between 8:13 pm and 11:13 pm with a rate limit of 5 minutes between runs.

When the card sort order is set to Manual, you can drag and drop cards to reposition them in a deck. Make sure that the lock icon is in the unlock state.

You may need to rearrange additional cards to get the exact look that you want.

If a deck is set to manual sort and if you are unable to reorder your cards, try the following:

NOTE: If you are using a deck as an NFC Deck, be careful when rearranging your cards. Because the cards are matched with tags that correspond to the exact position of the similarly named NFC tag, moving it in MFC Deck will cause the order to be out of sync. For instance, if you move B1 to the A1 position, tapping your iOS device on the A1 position on the physical NFC Deck will cause A1 to run, not B1`.

If you have an iPad, you can quickly assign shortcuts and decks to cards by dragging and dropping them from another instance of MFC Deck. 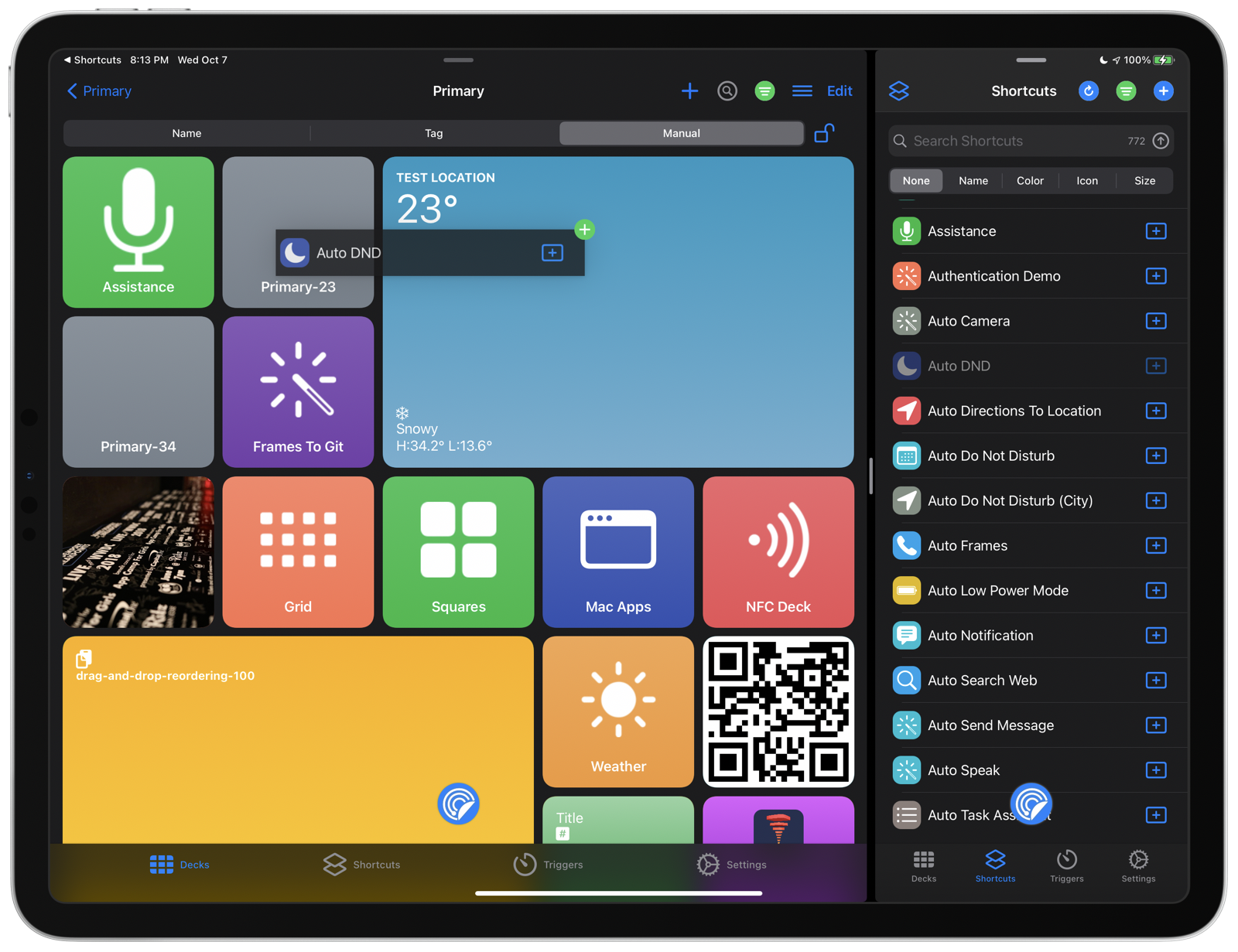